St. Joseph, MO – Central High School “Athlete of the Month” recognizes the top athlete from each team throughout the year.  Top athletes are nominated by the Head Coach of each sport that is in season based on outstanding performance on the field and in the classroom.  Voting begins on the beginning of each month and runs for one week.  Once selected, the chosen athlete will be asked to answer a few questions so that everyone can get to know him/her a bit better.

The Central Indians Athlete of the Month for September is tennis star, Bailey Colgan! 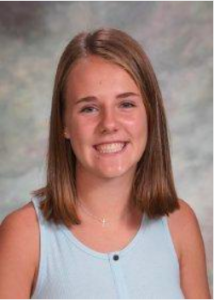 I am a sophomore at Central and I played the number three varsity spot for the girls tennis team this fall. I love being involved with extracurricular activities and hanging out with my friends. Some of the things I am involved in are FCA, Young Life, and Ping Pong Club.

Some of my best friends have described me as kind and supportive.
The thing I like most about Central is all the opportunities it gives kids of all interests.
Something people might find interesting about me is that I love kids. My dream is to be an elementary school teacher and a Young Life leader. In being a Young Life leader I would be following in the footsteps of my parents who were both leaders. Some of my leaders now were Young Life kids of my parents, and I would love one day to continue that circle.
The reason I started playing tennis is because both of my parents played growing up and they have shared their love for the game with me. I first started playing at a young age, but didn’t make a commitment until later in my eighth grade year. As I started playing more I found my love for the game and a family in all of those I played with.
My favorite things about playing are the people I am with, the environment, and just being able to play the game I love.
My proudest moment this season was when I was down 0-5 in my match against Blue Springs and I fought back to win 8-6. Later in the season our team played in the Barstow Invitational, I played doubles with my partner Caitlin Eivins. We played Blue Springs for our second match of the day. One of the girls was the girl I had come back to beat just a few weeks earlier. Caitlin and I were down 0-3 and then fought back to win in a tie breaker. This was a very important match to win for me because it gave me the opportunity to prove that my first comeback was not a fluke.
I would like to say thank you to all of my friends and family who have supported me through all of the votes in this past week! I also would like to thank my coach Lindsay Beger for the nomination and being a great coach through the last two seasons.
Indians Official Sponsor