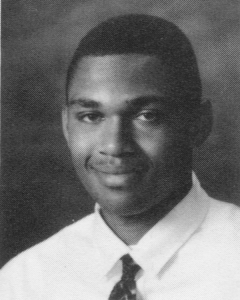 Dwayne Blakley – Class of ’97
Dwayne was a 3-sport athlete excelling in football, basketball and track.  Dwayne was a 3-year varsity letter winner in football and was an integral part of the 1995 State Quarterfinal Football Team.  During his senior year, he was voted Captain and Co-MVP of the football team.  He was named All-city Defensive End, 1st Team All Suburban Conference TE, and Honorable Mention Defensive End, 1st Team All News-Press TE, All-District and 1st Team All-State TE.  Dwayne went on to play Division I football at the University of Missouri adn also played five seasons in the NFL. 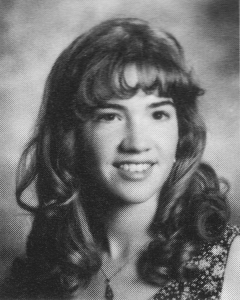 Ann Marie (Brooks) Chappell –  Class of ’97
The Central High School Cross Country teams for the school years between 1993 and 1997 were greatly benefitted by the presence of Ann Marie Brooks, who was named All-State on three separate occasions for the sport.  Ann Marie was also the 1996 State Cross Country Champion.  Ann Marie was named All-State on six separate occasions for the sport of track.  Ann Marie remains the current Central High School record holder for both the 1600 meter run and the 3200 meter run.  Ann Marie went on to run for the University of Missouri and was inducted into the MU Athletic Hall of Fame in 2008. 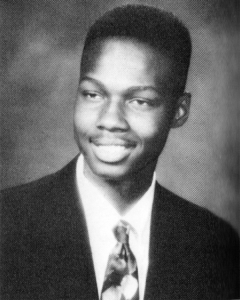 Andre Crittendon – Class of ’93
Andre is the only men’s basketball player to be named to Missouri All-State First Team in consecutive years.  Andre was All-State for the 1991-1992 year, as well as his senior year in 1992-1993.  He led those two teams to a 36-11 record.  In the St. Thomas Aquinas Tournament, Andre led Central to a championship win over Bartelsville, Oklahoma, who were ranked number one in Oklahoma and 20-0 at the time.  Andre was the MVP of the tournament after finishing the game shooting 13 for 14 from the field.  Andre went on to play basketball at Missouri Western State University. 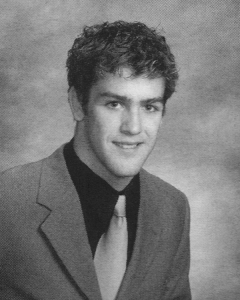 Blake Peterson – Class of ’04
In Blake’s four years at CHS, he held an outstanding 159-21 record, and was a two-time State Champion.  He finished his senior year with a perfect 49-0 record.  Blake also holds several Missouri State records, including most near-fall points in a season.  Blake not only excelled on the mat, but also in the classroom – he was the first and only wrestler at Central to earn a Division I wrestling scholarship to the University of Northern Iowa.

Men’s Basketball Team – Class of ’69
Although the 1969 Indians Basketball Team lost its first game that season, the team went on to win twenty-eight straight games thereafter.  The Indians – coached by Gary Sprague and assisted by Jim Perry – won first place in the Christian Brothers Tournament and the Savannah Tournament that year.   In City League action played at the St. Joseph City Auditorium, the 1969 Indians remained undefeated in order to capture the City Championship Title.  The team won at Sectionals that year; although they lost in the Quarterfinals game played in Maryville, MO, to the opposing team from William Chrisman, it was an incredible season to behold all in all.

Lady Indian Basketball Team – Class of ’89
The Central High School Lady Indian Basketball Team of 1989 – coached by Mary Kay Hyde and assisted by Jim Perry – created quite a stir in the hallways of CHS.  The gym was the place to be on the nights the women played.  Not only did they finish the regular season undefeated, they were ranked 23rd nationally by USA Today.  The Lady Indians won their first 25 games, while blowing the doors off of opponents by an average of thirty points per game.  The Lady Indians were City and District Champions and they earned a trip to the Final Four.  Although they lost on a last-second shot in the State Semifinal, they came back the next day and earned a third place medal.  Although they finished third, they were the best, both on and off the court.