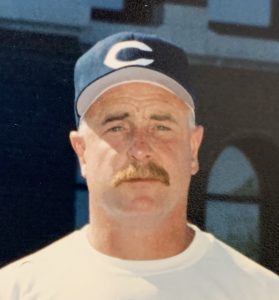 Mr. Tony Dudik is the winningest Head Football Coach in Central history.  Coach Dudik served CHS as a football coach for 33 years, 23 years as the Head Coach from 1987-2009.  In those 23 seasons, Dudik won 12 out of 17 City Jamboree Championships, multiple City Championships, a Conference Championship and trip to the 1995 Missouri State Quarterfinals.

As a teacher and coach,  Dudik touched the lives of over 20,000 students in the classroom and on the field.  Thirty-five players earned All-State honors, while over 60 went on to play football at twenty-six different colleges and universities.  During his tenure, 6 players went on to play in the NFL, with an additional two playing professionally.  Seven former players are now members of the Central Athletic Hall of Fame.  Tony Dudik also served as the Head Wrestling Coach at Central, during that span, he recorded over 120 dual wins and coached over 60 state qualifiers with several earning state medals. 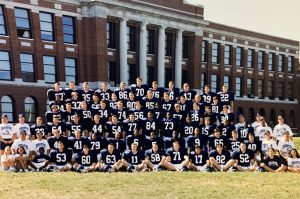 The Class of 1995 football team left the legacy of playing a “Big Game” every week.  Winning the City Jamboree, defeating Lafayette and Benton in dominating fashion, rolling Truman, getting a “gut check” against a tough Columbia Hickman team, outdueling Lee’s Summit, going toe to toe with #1 Blue Springs and securing a trip to the playoffs with three straight wins against Oak Park, Park Hill and William Chrisman.

The Indians defeated Fort Osage in the first round of State, advancing to the Quarterfinals against Blue Springs South.  Central finished the season with a 9-3 record, outscoring their opponents 357 to 248.   Central had a 1000 yard rusher in Mikael Henderson, 1000 yard passer in David Haasis and six receivers with over 100 yards receiving.  Defensive End, Paul Ideker earned All-State honors recording 7 sacks for a stingy defense.  The Class of ’95 included future All-State players in Dwayne Blakley and Aaron Crittenden.  Blakley and Crittenden went on to play in the NFL.